6 in the morning I woke up to a WhatApp message from Dr J, reminding me about our morning squid session. This was little odd, since my plan was to get there just about 1 hour before the complete low tide around 9:30ish, but after a few messages from Dr J with the pictures of the squid he caught, I found  myself making my way there. 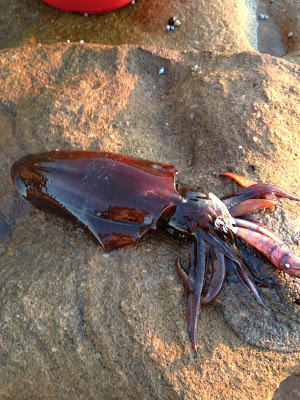 Well truth be told, it was actually about hour and half later, because I got there about 9am, but when I got there Dr J had already landed four innkers, so our day looked quite promising. And by 10am, using Yamashita Range Hunter 2.2, I managed to land four small size squid and decided on a little break, while Dr J was marching right ahead with 5 or 6 underneath his belt.

Soon after about 30 minutes of rest and Dr J signifying he had landed another two little one's, I decided to continue my quest to catch something over 30cm as we were not landing any big size innkers. And my hopes of landing something over 30cm came quite quick, matter of fact, on my first cast right after the break, and I landed another three more pretty much ten minutes apart. However by this stage the water was getting quite choppy, so we decided it was best we move back to the area where Dr J originally started.

Once we got back to where Dr J originally started his day and not to forget getting hit by a freaky wave out of nowhere, Dr J managed to land another two, and another one for myself. It was at this point I decided to call it a day and the time would have been very close to 12. However, once again like a true trooper Dr J kept going.

At the end of the day I think we landed total of 20, and a little video of me catching the squid we caught using nothing but my hands but it's best you check out the video yourself.